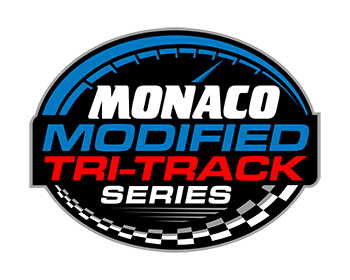 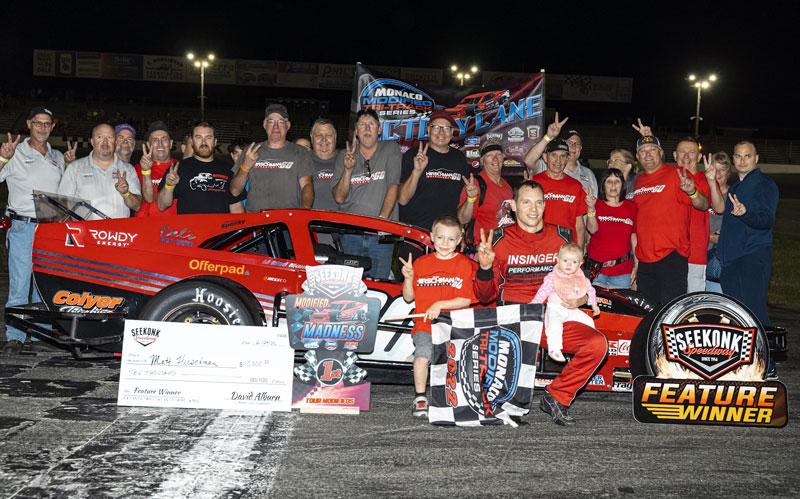 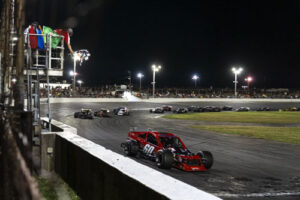 Souza Media: Matt “Big Money” Hirschman lived up to his name once again on Wednesday night, June 29, capturing the top $10,000 prize and winning his fifth Open Wheel Wednesday title at Seekonk Speedway in Massachusetts. Competing in the third round of the Monaco Modified Tri-Track Series season, Hirschman passed Woody Pitkat for the lead on lap 31 and never looked back, rolling to his second Tri-Track win of the season in three series events.

Hirschman’s fifth Open Wheel Wednesday victory came in the 17th running of the race. He’s the only driver to have passed the three win mark in the prestigious event. The Pennsylvania native opened what will be a busy week – as he will now move to Stafford Motor Speedway to compete with the Superstar Racing Experience (SRX) Series on Saturday, July 2, against top stars from across multiple racing disciplines.

The Seekonk action aired to a live audience on FloRacing.TV, and was also presented in front of a packed Massachusetts grandstand.

“I’ve been at almost all of these events and this is the first time we went back-to-back winning it,” Hirschman said. “There are so many variables that always play into this race. Tonight we had just the night we needed – a good clean night and we were able to keep the car out front. I never really left the bottom all night. We’ve been on a good run of success leading into Saturday at Stafford – hopefully we can keep it going.”

While Hirschman sealed another Seekonk win, Kyle Bonsignore charged through the field in the second half of the race and captured an impressive second-place finish. Driving the No. 07 for Justin Albernaz, Bonsignore worked his way to second, but couldn’t make a run at Hirschman. Even still, it was a good run for the 07 team – especially since they just got the car together for the first time in the last two weeks – after struggling to gain the parts they needed for much of the beginning of the season.

In support division racing, Dave Helliwell captured the victory in the 350 S.M.A.C Supermodifieds, dominating their 40-lap feature. After mentioning in Victory Lane that the team struggled all day in practice, there was no struggling in the caution-free race for Helliwell. He charged to the front, took the lead, and drove into the Seekonk sunset, capturing his first Seekonk victory in his first start at the third-mile.

In the 50-lap NEMA Lite feature race, Jake Trainor rolled to the win after passing Randy Cabral in lapped traffic. The race was slowed by a few cautions early, but Trainor took advantage of a lapped car, took the lead, and drove away at the finish. Cabral, a multiple-time Seekonk winner, would settle for second. The NEMA Lites will be back at Seekonk for the annual Boston Louie Seymour Classic on Wednesday, August 24.

The Monaco Modified Tri-Track Series will return to the track on Saturday, July 23 at Star Speedway for the annual SBM in New Hampshire.